The Winds of Change

But the winds of change have been blowing through Australia generating interest and investment at the state level. Every six months, the Clean Energy Council surveys senior leaders across the clean energy industry. The June 2020 survey results showed an increase in investment confidence, with the highest confidence in NSW, followed by VIC and QLD, largely due to state-based targets providing investment certainty, at a time when national policy remains uncertain.

“Australia’s energy landscape is undergoing rapid and unprecedented levels of change. We’re proud to be a driving force in Australia’s energy future, but we know that we can’t do it alone” Australian Energy Market Operator (AEMO).

Changes in the National Energy Market (NEM) are being driven by increasing interdependencies between our gas and electricity markets, as well as an evolving power supply mix, ageing infrastructure, weather, changing technologies and consumer preferences (AEMO).

AEMO was established by the Council of Australian Governments (COAG) in July 2009 to manage the NEM in the eastern and south-eastern states and Australian gas markets. They work in collaboration with:

The 20 year roadmap through the energy transition period to 2040

On 30 July 2020, AEMO released the ‘2020 Integrated System Plan (ISP)’, which provides a 20-year roadmap for the eastern part of Australia’s NEM through the energy transition period to 2040.

An Optimal Development Path has been prepared in consultation with 200+ stakeholders, it categorises projects into ‘committed’, ‘actionable’, ‘preparatory activities required’ and ‘future’ projects. We love AEMOs interactive map, which allows you to check out what is planned for your region. 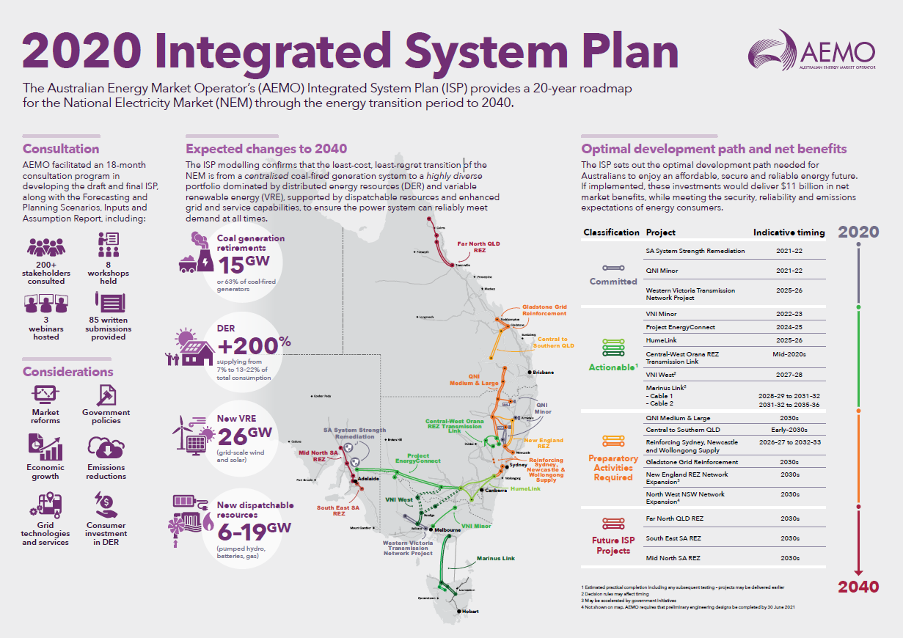 The ISP essentially plans to move from a centralised coal-fired generation to a highly diverse portfolio made up of:

The ISP essentially plans to move from a centralised coal-fired generation to a highly diverse portfolio made up of:

What is a Renewable Energy Zone (REZ)?

REZs are the modern-day equivalent of a power station.

Located in areas rich with potential for generation of renewable energy, they require the coordinated development of new grid infrastructure, efficiently connecting multiple generators in the same location. 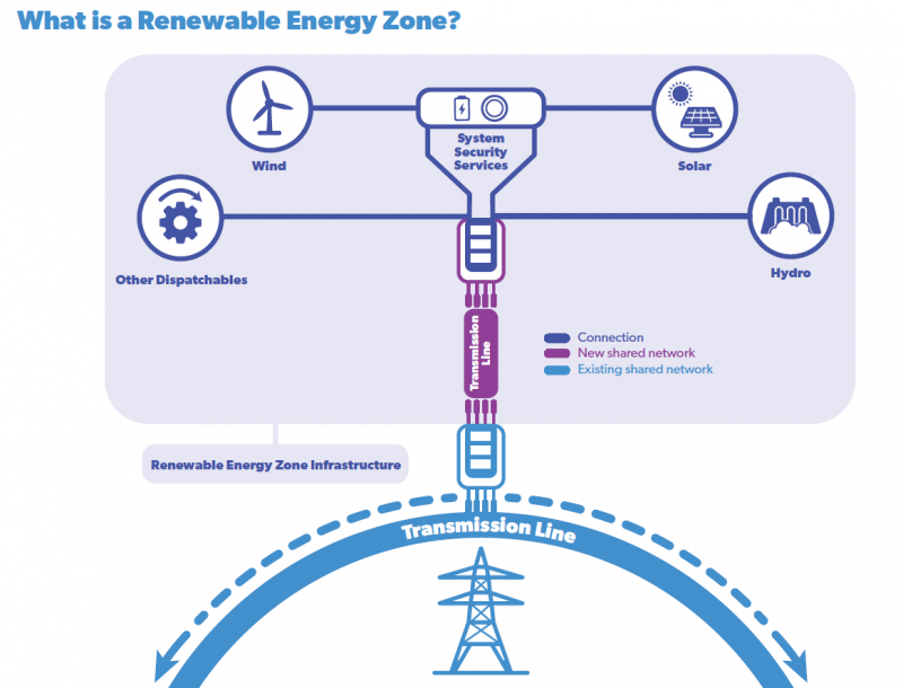 In November 2019, the NSW Department of Planning, Infrastructure and Environment released the NSW Electricity Strategy. The strategy aims to deliver three priority REZ in NSW:

This builds on the November 2018 NSW Transmission Infrastructure Strategy and supports the implementation of the AEMO 2020 ISP.

The renewables energy sector was asked to register their interest in the Central-West Orana REZ in June 2020. The sector brought forward 27,000 megawatts (MW) of new energy generation and storage projects, nine times oversubscribing the 3,000 MWs required for the REZ. This large show of hands is representative of $38 billion dollars in investment interest. Construction is expected to commence in 2022, following extensive community consultation and the approvals process.

Ultimately, regions, consumers and the environment will be the big winners. With the announcement of the New England REZ in July 2020, Deputy Premier John Barilaro noted that the new stage two zone will “attract 12.7 billion in investment, support 2000 construction jobs and 1300 ongoing jobs – while lowering energy prices and future-proofing the regions.” The REZ aims to contribute 8000 MW of capacity, adding to the projected 3000 MW in phase one in the Central West zone. Large scale solar and wind capacity in the entire state currently sits at 3300 MW.

Closer to home, the Illawarra, Southern Tablelands and Canberra regions have their own high-profile renewable operations that contribute to state totals. These include the Capital Wind Farm near Bungendore, the co-located Gullen Wind and Solar Farm near Crookwell, and new wind farm projects in Collector and Biala who installed turbines in April 2020, to name but a few.

Co-located wind and solar farms such as the Gullen Range operation are the future of renewables. Wind power generation in NSW powers thousands of homes sending clean renewable energy to the National Electricity Market (NEM), and is only set to grow with the announcement of three renewable energy zones in NSW.

Thanks goes to the following articles and sources who made this article possible:

Blend ESQ About the author